Spanish in the U.S.: Myths and Realities

The U.S. has one of the largest populations of Spanish-speakers in the world. Yet the varieties of Spanish spoken here suffer from several misconceptions. This talk summarizes recent research on Spanish in the U.S., addressing questions such as these: What are some of the principal characteristics of Spanish as it is spoken in the U.S., resulting from contact with English, from reduced input and output, and from contact between different Spanish dialects? Is “Spanglish” a positive or a derogatory term? Is a single U.S. Spanish dialect likely to emerge? And what are the best ways to encourage Spanish development among heritage speakers? 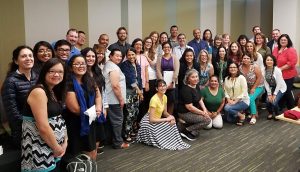 April 14, 2021
W.I. Stevenson Middle School
Read More
We use cookies to enhance your browsing experience. By using this site you are accepting the use of such cookies.