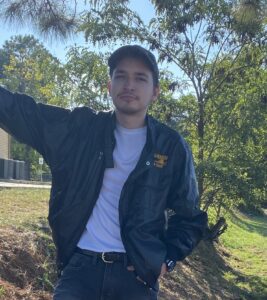 My name is Saúl Ríos Guerrero, I am currently a student at Texas A&M University-Commerce. I am in the process of getting my bachelor’s degree in Spanish with a certification in secondary education for levels 7th through 12th. I aim to teach Spanish to native speakers, Spanish as a second language, and English as a second language at the high school level.

I was born and raised in Querétaro, México. When I was fifteen, I moved to the United States in pursuit of the American dream. I have personal experience in second language acquisition, I know how challenging the process of learning a foreign language can be. I will share my experience with future ESL students who come to this country with dreams and ambitions but who also have a language barrier in front of them. I want to be one of the reasons why they pursue a college career.

Spanish is so important in my life. knowing both English and Spanish has been a blessing. Thanks to the help of my parents and my sister, I have been able to maintain good diction when speaking Spanish. I consider myself someone culturally competent who has a dominant performance of the Spanish language in its different forms. I can code-switch from speaking with colloquialisms in very informal Spanish to speaking good professional Spanish. This ability has opened a lot of doors for me and has given me a wide variety of friendships along the way. The Spanish language has given me a lot of opportunities, jobs,  friends, and passions, and now it’s giving me a professional career. Spanish has given me too much in this life that I have to give some back to the language. My duty as a future Spanish teacher is to encourage and help non-native speakers to learn the language and to help and encourage heritage speakers to perfect and be proud of the language they already know.

My hopes for the future are to become a high school Spanish/ESL teacher, and soccer coach. I want to teach and share what I know about my two greatest passions: Spanish and fútbol. While accomplishing those dreams, I want to pursue a master’s degree in Spanish or in any program that would help me fulfill the requirements to teach Spanish literature and culture classes in universities.