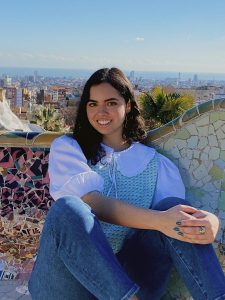 My name is Isabella Alexandria Marrin and I am a second-year student at Texas Christian University. I am currently majoring in Political Science and Spanish and Hispanic Studies with a minor in Philosophy and an emphasis in Comparative Racial and Ethnic Studies, on the Pre-Law Track and in the John V. Roach Honors College. Being bilingual from a young age brought many benefits, but also many challenges. On the one hand, I was able to communicate across cultures, speak with my family and friends, as well as connect with my heritage. But on the other hand, there were times where it felt as if I grew up in two separate worlds—that I was too “American” to be Guatemalan like my family, but too “Guatemalan” to be like my American peers.  If I were to give a piece of advice to other Spanish heritage students, it would be to bridge the gap between these two worlds. Own your identity as Latinx and be involved in your respective communities to make positive change. It is only until we feel empowered to use our voice, passion, and desire to fight for the things we care about, that we can change the world.

This is exactly why connecting with my heritage language has brought me so much joy in recent years—it has opened me to a variety of experiences, opportunities, and communities. I would translate documents for ESL parents pertaining to their children’s education as well as sit in as an interpreter during parent-teacher conferences. When the vaccination rollout for the COVID-19 pandemic began in early 2021, I worked as a translator for Baylor, Scott, and White Health. After this position, I worked as a GED tutor for ESL staff at TCU through a Service-Learning course at my university. Here, I was able to connect with staff on a deep level, form a cultural bond, and establish trust—all of which transcended beyond, but nonetheless was aided by, my ability to speak Spanish.  It has been my honor to work in these roles.

In the future, I hope to work as an attorney for the ACLU, be an immigration lawyer, or even be on the Supreme Court. Growing up, I was exposed to many injustices cast upon my family from Guatemala. As I grew older, I knew I had a calling, if not a destiny, to be a voice for those who are often silenced or ignored. Undoubtedly, my heritage language will play a present and active role in whatever I decide to do. One day, I want to make a difference in the world, and I know that by speaking both Spanish and English, I am already halfway there.