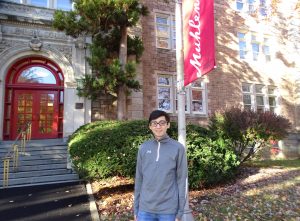 “My name is Edwin Alvarez and I am a first-generation college student at Muhlenberg College originally from Burtonsville, Maryland. I am currently in my fourth year of college studying Biology and Secondary Education. My family is from El Salvador, and while I was born in Maryland, I learned Spanish at home and learned English in school. I had a basic understanding of Spanish to the extent of being able to communicate with my parents, but once my older brother moved out when I was 12 years old, my parents needed help with translating letters, writing checks, and translating at appointments. This was a learning process because I did not exactly have perfect mastery of either language to then have to translate and explain often complex topics such as insurance to my parents. This was around the time that I began to take Spanish from 7th grade up to AP Spanish in 11th grade. My command of Spanish began to improve, but I still did not see the true value of my bilingualism.

It was not until I took the heritage speakers class with Profesora Moreno that transformed my understanding of Spanish and the importance of continuing to grow my Spanish skills. In this class, we learned about the history of Latino Americans in the United States and the many ways that Latino Americans have been villainized throughout this country’s history. This is especially important because I have seen the numerous ways that institutions fail my parents simply because they don’t speak English. Understanding that now, my bilingualism is a central part of my identity as a person and future educator. Since taking Spanish for Heritage Speakers, my favorite part of using Spanish at school is being a Spanish conversation partner and Spanish tutor. This gives me the opportunity to speak one on one with other Spanish students, some heritage speakers, and some learning it as a second language! Spanish tutoring is also such a joy because I can teach others Spanish while also refining my understanding of the language in the process.

My advice to other heritage speakers is to use Spanish whenever you can and don’t be afraid to help or teach others using your language skills! You have a skill that can serve an entire community within any field. This is especially true in education where educators often do not reflect the demographics of the students they serve. I will be student teaching in my final semester, and I will be working in an English learner biology classroom! I am beyond excited to work with other heritage students and show them the value of their heritage and the unique perspectives they provide to the classroom.” 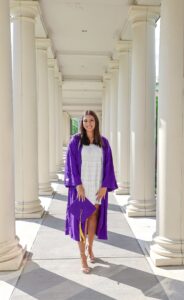